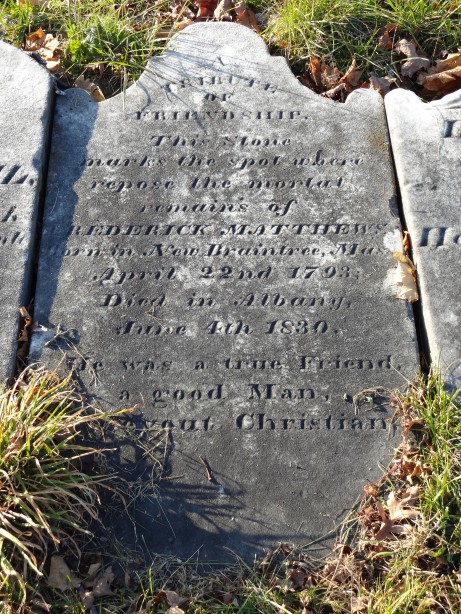 Misc.:  Much of stone has darkened to gray, some chipping along edges, and bottom corners are becoming embedded in the earth.  Overall, the inscription has some minor erosion (mainly to the first lines), but is very legible.

Inscription:  A Tribute of Friendship.  This stone marks the spot where repose the mortal remains of Frederick Matthews, Born in New Braintree, Mass. April 22, 1793; Died in Albany, June 4th, 1830.  He was a true Friend, a good Man, and a devout Christian.

Unlike many stones in the Church Grounds which have broken or suffered other damage since being transferred to the Albany Rural Cemetery, this one was damaged prior to its removal from the State Street Burying Grounds.  The entry for it in the Common Council’s inventory of graves places it in the First Presbyterian Church’s lot and notes “”stone broken and gone.”

Exactly how the stone was damaged or when is not known, but it would have occurred prior to 1868 when the inventory was compiled.  The breakage may have happened when the grave was moved from its original location Most likely this headstone was first placed in the First Presbyterian Church’s graveyard and probably moved to the congregation’s section of the municipal burial ground just south of modern-day East Capitol Park before being moved yet again to the State Street Burying Grounds after 1806.  With so many relocations, it’s easy to see how the stone could have been broken prior to its final move to the Rural Cemetery.

Burial records from this church only begin in 1786, but at some point after the death of this unknown Phelps as I have not yet been able to locate any information on this woman beyond what is carved on the stone.  She would have been born around 1726, but her first name, maiden name (assuming that Phelps is her marriage name), and other information remain unknown at this point.  Evidently, whomever commissioned the stone was prosperous enough to afford one of the more elaborately-carved markers from this period and lot.  The tablet is surrounded by a border of bold scrollwork and it is very possible a stone like this would have featured some sort of soul effigy or other decorative element at the top.  The inscription includes a short epitaph:  Death is a debt to nature due:  Which I have paid and so must you.

This piece of marble appears to be the lower portion of a headstone.   The upper part with the deceased’s name, dates, and other information is missing; though it’s impossible to say whether this breakage happened while the stone was in its original location, during the removal to Albany Rural Cemetery, or at some point after being placed in the Church Grounds.  The upper portion may yet be in the Church Grounds as there are more than a few partial stones laid among the complete grave markers.

In his multi-volume Annals of Albany, Joel Munsell included complete text from inscriptions in the Dutch Reformed, Presbyterian, and Episcopal sections of the State Street Burying Grounds prior to the transfer of remains and headstones to the Rural Cemetery, but no inscription in the Annals matches this one which makes it impossible to identify the deceased without the missing piece.  The epitaph reads:

My companion’s departed before me.  Afflictions no more shall she know.  Her spirit has landed in glory.  Her hours are finished below.

The white marble has darkened, though the text is generally legible.  Unfortunately, a large portion of the upper right corner has broken off from what seems to have been a finely carved stone.  Such additional damage is not uncommon to the stones in the Church Grounds as they lied flat or almost flat on the earth and are subject to erosion, damage from the weight of snow, and from the wheels of mowers passing over the rows of gravestones.