On September 15, 1869, the Albany Morning Express reported quite briefly that “Six hundred and eighteen bodies have been interred in the Albany Rural Cemetery from the 1st of April to the 13th of September, 1869.”

While the news brief does not specify, this may refer to bodies being removed from the State Street Burying Grounds to the Church Grounds lot.  Certainly, it would represent a good percentage of the remains to be transferred and these reported burials occur at a time when such exhumations and reburials would have very likely been underway as the Burying Grounds had closed and work had yet to begin on landscaping Washington Park. 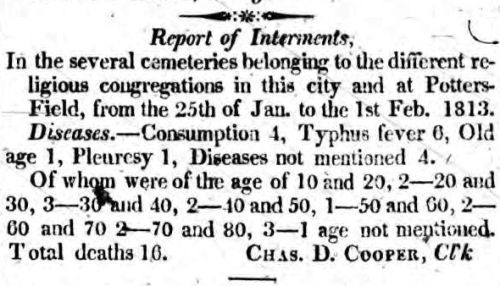 The clipping above from the Albany Argus in 1813 is a Report of Interments made during a typhus epidemic.  The burials were made in the various church-owned sections of the State Street Burying Grounds, as well as the Potters Field.  The causes of death include Consumption, Typhis, Old age, Pleuresy, and unspecified diseases.

Among those who passed away during the reporting period was Colonel Henry Quackenbush.

Like Albany’s Washington Park, Chicago’s Lincoln Park was previously used as a large cemetery.  The site below is a fascinating look at a project exploring that history: