Carved in memory of Captain Peter Winne, this large sandstone is one of the most exceptional markers in the Church Grounds lot.  Located in the Dutch Reformed Church’s rows, it lies  at the northwest corner of Grounds.

Like the Rev. Ellison stone, this rectangular slab was not originally an upright headstone but was meant to serve as the top of a table-style tomb in the First Dutch Church’s graveyard at the modern-day intersection of South Pearl and Beaver Streets..  In contrast to the plain marble Ellison slab, however, this stone is quite richly decorated.  This stone is referenced as one of the stones that was later kept in the vault of the Madison Avenue Reformed Church after being unearthed during 19th-century construction. 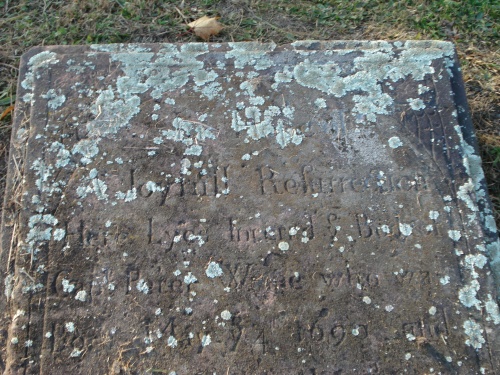 Not one, but two soul effigies are carved at the head of the stone with the winged faces set at angles in each corner.  The soul effigies

Though the soul effigies are often encrusted with lichens, the carvings themselves are reasonably clear.  They featured moon-like faces and flowing hair.  Incised crescents on the wings are meant to suggest layered feathers.

The corners at the foot of the stone features a stylized rose in each corner, though these are more worn than the soul effigies often partially covered with earth, grass trimmings, and other debris.

The stone’s edge is deeply beveled and the inscription is enclosed by a large, arched tablet.  The inscription is well-cut and still legible, though the upper portions of the text tend to be clears than the last lines.  The whole stone has some chipping, pitting, and erosion due to exposure.

In Hope of A Joyful Resurrection Here Lyes Interr’d the Body of Capt. Peter Winne who was Born May the 4 1690 and Departed This Life June the 6 1759 in the 70 year of his Age

Captain Peter (or Pieter) Winne was the son of Albany merchant Franz Winne and Elsie Gansevoort (whose gravestone is featured in this post on the Church Grounds’ oldest stones).  He inherited his family’s house which still stands just south of the city and was depicted in a painting by Len Tantillo.

From a young age, Pieter Winne learned the fur trade and, by his thirties, had his own sloop making monthly trips to transport goods between Albany and Manhattan.  The cargo included tobacco, furs, wine, lumber, grain, salt, rum, sugar, paper, textiles, and slaves.

From 1737 until his death, Captain Winne also represented Albany in the colonial Assembly which met in New York City.

Winne never married and, upon his death, the prosperous merchant and skipper left the majority of his estate to his brother-in-law, Abraham Douw, and his nephew, Peter Winne Douw.  His will can be read here.