Onondiyo, known to the Dutch and English at Albany as Captain John, was an Oneida sachem respected as both a fine orator and a warrior who had served as a scout to the Americans during the Revolution.  He was described by white contemporaries as “a young Chief of first abilities” in his nation.

Along with Skenandoah (Shenandoah), he was a member of a delegation of Oneida sachems who had traveled to Albany to negotiate a treaty between their nation and New York State.  While in Albany, Skenandoah and Onondiyo both fell seriously ill, possibly from smallpox.  Skenandoah recovered, but Onondiyo died on September 12, 1795.   The Oneida delegation remained in the city to honor him with their own rites according to a September 15 death notice printed by Joel Munsell in Volume 3 of his Annals of Albany.

Capt. John, one of the Oneida sachems, and the principal orator and public speaker of the nation, died and was interred in the Presbyterian cemetery. The deputation of chiefs and sachems of the Oneidas, then in this city, attended the funeral, and performed the solemnities thereof, according to the custom of their nation.

Onondiyo was a Presbyterian convert and, as noted above, buried in that church’s cemetery.  The Presbyterians had recently acquired a section of the municipal burial ground just off Eagle Street and immediately south of the present East Capitol Park.   The remains in this early municipal cemetery were removed to the State Street Burying Grounds after 1800, and, ultimately, reburied in the Presbyterian portion of the Rural Cemetery’s Church Grounds.  Among the many remains interred here without any record or headstone are those of the eloquent Onondiyo.

The Book of Burials – In The Church

The Book of Burials contains a number of individuals who are listed as being buried “in the church,” most likely meaning their coffins were laid directly beneath the church floor.  This practice was not uncommon in parts of Europe and colonial New York.   The first person on this list is Susana Brat (Susanna Dircks Bradt) whose grandson, Barent Brat, was the clerk of the church who kept this Book of Burials.  Susana was placed in the church on May 8, 1722; the next burial in the church occurred in 1729 with the interment of Anna Brat.  It was then another seventeen years before another person was buried in the church;  it is possible that, by 1746, room was no longer available in the vault below the church.  As with the vault burials, these would have been removed when the church was demolished and brought to either the burial ground at the Second Reformed Church or its vault.

END_OF_DOCUMENT_TOKEN_TO_BE_REPLACED

The Book of Burials – The Vault

Below is a chronological list of burials in the vault of the First Dutch Reformed Church which stood on Broadway at the foot of State Street hill until 1806.

Many of these burials were removed to the Second Dutch Reformed Church where they were placed in a vault beneath the bell tower.  Later, some were moved to the Madison Avenue Reformed Church and, eventually, to the Church Grounds (see Albany’s Dutch Stones and Not The Right Stones).

END_OF_DOCUMENT_TOKEN_TO_BE_REPLACED 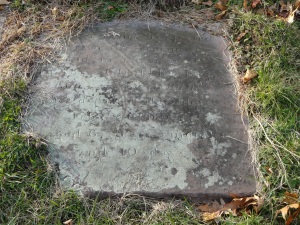 Heavily discolored stone with large lichen patches.  Most edges are embedded in the soil.  Inscription is generally legible despite the darkened and lichen.

Inscription:  This Tomb is erected over the remains and in memory of Henry Cuyler, Esq.  Late of Green Bush Who departed this life Feby. 5th 1803 Aged 67 years 5 months & 10 days

Henry Cuyler, Esq., a merchant and British sympathizer during the Revolution, is profiled by the Colonial Albany project.  His biography can be found here.

Bones In A Sugar Barrel

A brief article in the August 2, 1888 edition of the Albany Evening Journal recounts the discovery of remains at the former site of the Dutch Reformed burial ground on Beaver Street near South Pearl Streets.  A previous article appeared on July 31 – see Ancient Albanians and The Burying Places.

The four human skeletons that were unearthed today on the site of the old Dutch church burying ground on Beaver street were placed in a sugar barrel. The barrel was about half fill when the last skull was dropped in. The bones were found about 8 ½ feet below the surface, after the three feet of filled-in earth had been removed. The skulls of the four skeletons were towards the west. They were laid out very regularly, the back bones of the arms and legs being held as if in a mould in the grasp of the light loam soil. Under two of the skeletons evidence of the cedar bottom of a coffin was found. There was nothing left, however, of the sides or top of the coffin. The decayed bits of wood were so very small and decayed that even if there had been a cover and sides to the casket, the shovels and picks of the Italian workmen would have scattered them before the bones of the dead were reached.

They Had Sound Teeth

The soundness of the teeth was remarked by all who saw the skulls. In two of the skulls, the teeth were perfect. The Italian workmen were careful not to touch the bones with their hands. They would force the bones from the grasp of Mother Earth with a pick and then toss them upon the embankment with a shovel. When the bones were discovered, the tan-colored Italians jabbered less than usual and seemed more awe-stricken that the few spectators of the scene.

A matched pair of stones for a husband and wife.  Both feature a willow-and-urn motif and oval tablets surrounded by wreaths of foliage.  Both feature inscriptions below the tablets and a twisted-rope border near the base.  Samuel Hill’s stone has typical darkening.  Inscription is deeply carved and very legible.  There is a large break at the base on the right side and some wear to the finials, especially on the right.  Mary Hill’s stone is in comparable condition.

Inscription:  Sacred to the memory of Samuel Hill who departed this life May 12, 1819 in the 52nd year of his age.  Friends nor physicians could not save This mortal body from the grave Nor can the grave confine me here When Christ commands me to appear.

Inscription:  Sacred to the memory of Mary Hill who departed this life January 15, 1816 in the 44th year of her age.  Behold we see while here we look The dearest ties of friendship broke The grief and sorrow pierce the heart The dearest friends we must see part.

Samuel and Mary’s son, Thomas B. Hill, is also buried in the Church Grounds and featured in this post.  His headstone also features a willow-and-urn motif, but in a different style, more ornate style.

Samuel Hill was a prominent Albany merchant whose brick mansion (designed by Philip Hooker) still stands as the Fort Orange Club on Washington Avenue.  More on Hill can be found here.  His wife, Mary, was the daughter of Thomas Barry, an Irish-born merchant whose business contacts included Sir William Johnson and who was a founding member of Albany’s first Catholic Church, St. Mary’s.

A simple stone in relatively good condition with no major chipping or breakage.  Stone is darkened, but inscription is very legible.  Some minor lichen patches.

Paul Clark was the owner of a tavern at what is now the intersection of Madison Avenue and Lark Street (once called Clark’s Corner).  He was also well known for his interest in horticulture.  With the demolition of the last remnants of the Clark Tavern in recent months, Paul Clark has been the subject of several blogs: 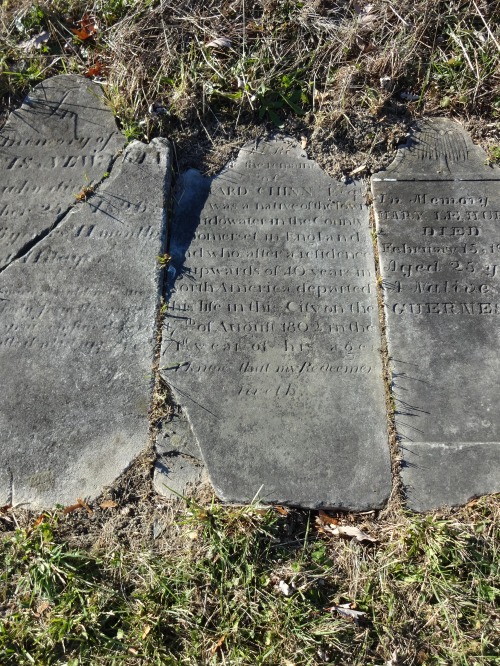 A very simple stone without decoration, but a lengthy inscription carved from edge to edge.  Stone is darkened with a large section flaked away near the base, but the entire inscription is intact and very legible.

Inscription:  Here lie the remains of Edward Chinn, Esq. was was a native of the town of Bridgewater in the County of Somerset and who after upwards of 40 years in North American departed this life in this city on the 17th of August 1802 in the 71st year of his age.  I know that my Redeemer liveth.

Edward Chinn was born around 1732 and came to North America to work as a trader in Montreal, often spending winters among the Ottawa near the Great Lakes.   During the Revolutionary War, he departed Canada for New York and embraced the colonial cause.   In a letter to General Horatio Gates, Chinn described himself as “one of those Persons, who was obliged to leave Canada, when the American Army retreated therefrom and waiting with Expectation of one day being able to return.”  Chinn served in the 1st Canadian Regiment of the Continental Army and, in 1779 married Margaret Livingston, the sister of his commanding officer.

Following the war, the Chinns settled in Claverack.  Census records show they owned three to four slaves between 1790 and the time of Edward Chinn’s death.  Edward Chinn was buried in the Episcopal section of the State Street Burying Grounds and census records show that his widow relocated to Maiden Lane in Albany until her death in 1820.  She is also buried in this section, but her stone is some distance away. 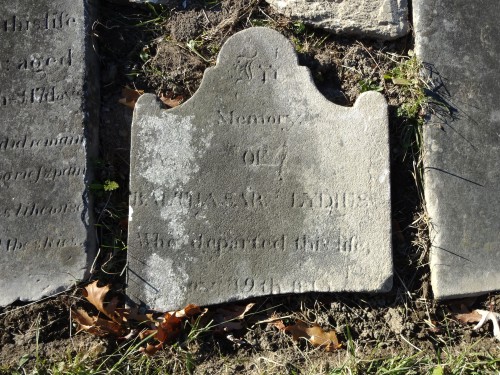 Small, simple stone with the usual darkening from exposure.  Lower half is broken away across the last visible line of text.

Inscription:  In Memory of Balthasar Lydius who departed this life November 19, 1815, age 78 years.

Also know as Baltus, Balthasar Lydius was well-known at the time of his death as an “eccentric old bachelor” and his death marked the end of the Lydius family line in Albany. His grandfather, Domine Johannes Lydius, came from Antwerp to lead the Dutch Reformed Church here and his father, Johan Henry Lydius, was active in the fur trade between Albany and Montreal.  Bathasar’s mother, Genevieve Masse, was said to be part French and part Mohawk.  The family home where Balthasar spent much of his life stood at northeast corner of State and Pearl Streets (a plaque now marks the location of “Lydius Corner”) and Madison Avenue was formerly called  Lydius Street.

A biography of Balthasar Lydius can be found at the People of Colonial Albany project.