With very few exceptions, almost all of the stones in the Church Grounds are flat slab-style headstones laid directly on the ground.  There are a few variations, such as the vault covers of Captain Winne and Reverend Ellison, and a couple of obelisks like the one shown here.

The obelisk was a very popular style of gravestone in the early to mid-1800s and the rest of the Albany Rural Cemetery is filled with examples, ranging from small and slender to very large ones which tower over the surrounding memorials.  Tiny obelisks were even carved beneath the stylized willows on early 19th-century stones such as A number of the older, smaller obelisks in the Cemetery predate its 1844 consecration and were moved from the State Street Burying Grounds.  The weathered Charles Webster gravestone on the South Ridge is typical of these relocated obelisks, most of which were relocated to private family plots newly purchased in the Cemetery when the State Street site was closed in the late 1860s.  This particular obelisk of white marble was brought to the Church Grounds from the Episcopal lot at the State Street Burying Grounds, undoubtedly because the deceased had no descendants or other kin in the area to take charge of moving the grave in advance of the mass transfer of graves by the Albany Common Council. END_OF_DOCUMENT_TOKEN_TO_BE_REPLACED

Misc.:  A small, but thick stone, it is in very good shape for its age with some chipping around the edges and a small spots of lichen.  It  predates the establishment of the African Methodist Episcopal Church and Dick does not appear in the massive list of graves inventoried by the Albany Common Council prior to the removal to the Rural Cemetery.  However, that list is not complete.  There are quite a few graves now in the Church Grounds that were not printed in the inventory, perhaps omitted by mistake as the stones were transcribed.  He may have originally been buried in the previous municipal cemetery which stood just off Eagle Street south of the State Capitol.  This cemetery received burials from around 1789 to 1799, the same year Dick died or he may have been buried in one of the small graveyards identified on period maps as “Negro Burying Grounds”  There is also a possibility that he was buried in a family plot at the Dutch Reformed Church’s graveyard and was among the headstone found in later excavation, then placed in the vault of the Madison Avenue Reformed Church prior to being moved to the Church Grounds.

Nothing is known about this young man beyond the inscription on his gravestone.  John F. Pruyn, a well-known skipper and merchant, was the owner of at least six slaves whom he began to gradually emancipate not long after Dick’s death.  Exactly why Dick was provided with a headstone in an era when most slaves and even freed blacks were buried in unmarked and now lost graves is also unknown.

In Search of Dianna Mingo

A Colonel and A Faithful Slave

Not The Right Stones (Dick’s headstone is also discussed here)

These are two of the most distinctive gravestones in the Church Grounds; both feature soul effigies which can be attributed to known carvers.

END_OF_DOCUMENT_TOKEN_TO_BE_REPLACED 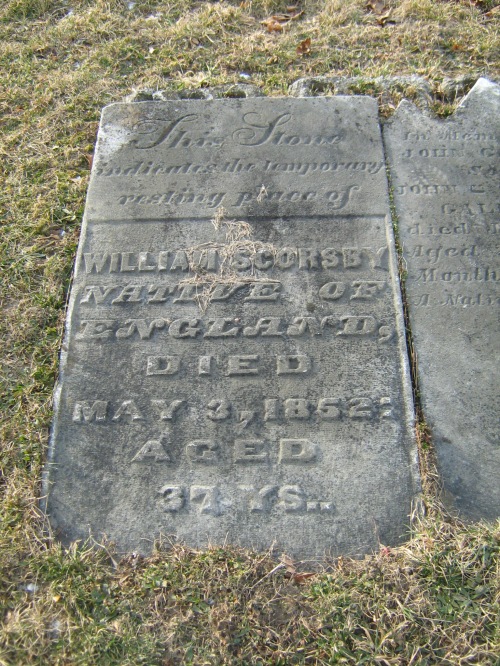 Misc:  A very simple stone with upper half of text in script, lower half in plain block lettering.  Marble has darken to gray and there is minor chipping around the edges, but slab is in otherwise very good condition and extremely legible with just the lower edge embedded in the earth.

The 1844-5 edition of Hoffman’s Albany City Directory lists a William Scorsby as a carpenter living at 162 South Pearl Street and his name appears on naturalization documents held by the Albany County Hall of Records; he appears to have filed a Declaration of Intent in 1849.  He appears in the 1850 census as a resident of the city’s 1st Ward with his wife, Elizabeth, and a nine year old son, also named William.

Baptismal records from Scarborough, England show a William Scorsby was christened there on October 2, 1814.  If this is the same William, his parents were Matthew and Martha.

It is interesting that his gravestone notes “a temporary resting place” which could suggest that there were plans to have William Scorsby’s remains returned to his native England.  His resting place was indeed temporary as he was among those moved from St. Peter’s lot at the State Street Burying Grounds to the Rural Cemetery. 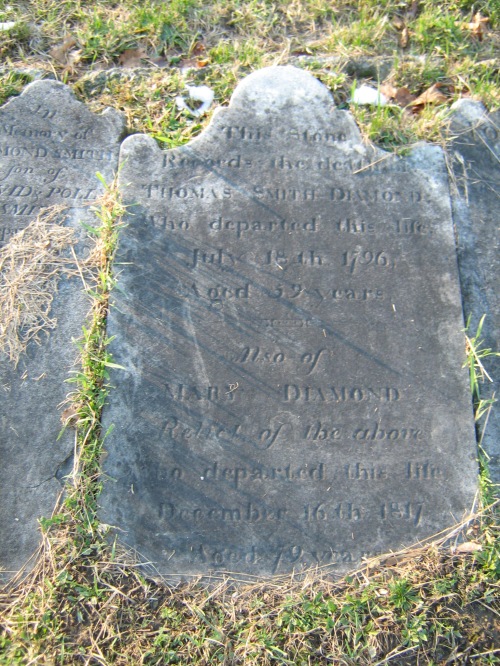 This stone is in reasonably good condition with no visible breaks, although the lower half is embedded in the earth and exposure to the elements has darkened the white marble to a dull gray.  It remains legible.

Thomas Diamond was reportedly of Huguenot ancestry.   He is known to have been a member of the Albany Masonic Lodge and to have served in the Albany militia during the Revolution as he was granted a land bounty after the war.  A carpenter by trade, he worked on the building of the Van Rensselaer Manor. Before settling permanently in the city of Albany, he lived for a time in Lansingburgh and his son, William, was said to be the first male child born there.

Mary Diamond’s maiden name was McLane.  After Thomas’ death, she is known to have lived at 109 Lydius Street (now Madison Avenue near South Pearl Street). 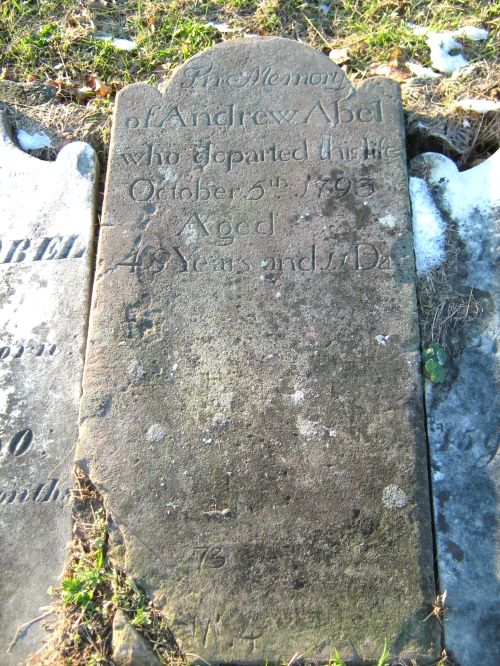 Misc.:  Small, faint carvings can be see at the bottom edge of the stone (which would have been underground when the stone was upright in its original location) and include the number 73.

Inscription:  In Memory of Andrew Abel who departed this life October 5th 1793  Aged 48 years and 11 Days

This stone has some minor damage to the lower half and some minor scaling of the stone the beginning of the last line of text, but is very legible.

Andrew Abel was born in Hanover, Germany and emigrated to Albany sometime prior to 1768 when the first local written record of him appears.  Abel served as a constable and firemaster in Albany where he married Anna Marshall in 1771.  He also served as an apprentice to shoemaker Jacob Groesbeck.