Misc.:  Small headstone with a great deal of discoloration and wear.  Some chipping of edges and corner, lower edge partly embedded.  All text is worn, but generally legible except for an epitaph near the bottom.  Stone features a lovely floral motif showing a wilting rosebud.

A sad, but charming stone; the bud wilting before it bloods symbolizes the death of one very young.  So far, there appear to be no local records of this family, but New Hamphire census records from this era include an Elijah Presby who may be the father of Byron and the two infants who may have died without being given names.  Church records may hold more information.

Edited June 26, 2013:  The Cemetery’s burial card has a transcription of the stone showing that the final like reads Suffer the little children to come to me.

Misc.:  Edges of the stone are deep in the grass, lower edge appears to be partially embedded in the earth.  Stone features a willow tree which frames an urn with a flame.

Inscription:  Erected November 29, 1828, in memory of Mrs. Abigail Wilson, second wife of Samuel Wilson, globe manufacturer; who died August 28, 1828, in the 25th year of her age.  The many exalted virtues which conspicuously adorned the character of this amiable woman, will render her long remembered and lamented by a numerous circle to whom she was allied by the tenderest of ties of consanguinity, friendship, and affection; by whom her society was ever hailed with delight, and joy, and esteem, as a balm to sooth their sorrows and afflictions.

With its classic design and glowing epitaph, this is an exceptional gravestone which was one of a pair erected by Samuel Wilson.  Records, including Joel Munsell’s Annals of Albany, indicate another stone was erected on the same date for Wilson’s first wife, Jane, who died the preceding year at the age of twenty-eight.  Jane’s stone, which has not yet been located and photographed, also features a long, loving epitaph and also memorializes an infant son who died a month before Jane.  This Samuel Wilson was the son of noted globe manufacturer James Wilson.  The elder Wilson is also buried in the Albany Rural Cemetery with an elaborate monument by Robert Launitz. 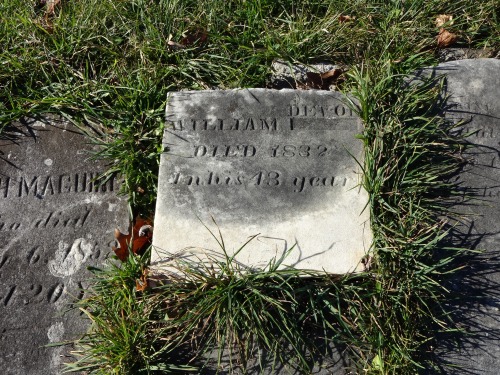 Misc.:  Stone shows typical darkening and is broken in half; the bottom edge appears to match the top edge of the piece resting below it.  Text is legible, but the carver appears to have made a mistake and chiseled out the error.  The surname is carved directly above the “correction.”

As noted above, the carver made an error in the surname, chiseled it out, and inscribed the name Devoe above.   There is a lack of dates and the stone seems to have been done rather hastily; there is a possibility that William Devoe was a victim of the cholera epidemic that struck Albany in 1832.  There is almost no other information available about this man at the moment; the Common Council inventory of graves from the Albany Methodist Episcopal congregation does list a Sarah Devoe (died 1841) as the wife of one William Devoe and a Julian (died 1836) as her daughter.  It is possible, but not yet certain if these women are connected to the same William Devoe who was originally buried with this stone.

Misc.:  Stone features a classical urn beneath a willow tree.  Stone has the usual darkening, lower edge is partly embedded in the earth, some blurring of carving due to erosion, text is legible..

John Walker was a native of Worcester, Massachusetts.   A printer by trade, he moved first to Colchester, Vermont, then to Rouses Point, near Champlain, New York, where he also served as a Deputy United States Customs Officer.  He died in Albany while serving in the New York State Assembly and, following his death, fellow members of the Assembly wore black armbands as a “testimony of respect.”  His widow, Sarah Fitch Walker, outlived him by almost forty years and is buried in Rouses Point.

The following is an account of Assemblyman Walker’s death as printed in the Albany Evening Journal:

Sudden Death of a Member of the Legislature. The Hon. John Walker, a member of the from the county of Clinton, was found dead in his bed at the Merchants Exchange about half 11 o clock this forenoon.  Mr W has been in feeble health for several weeksm but was in his seat yesterday, and retired last night after passing the evening in cheerful conversation with his friends, as well as he had been during the session.  His absence at the breakfast table was not remarked nor was he missed until Mr. Wright had occasion to open his room door, when he was discovered lying on his side, without the distortion of a muscle, and apparently in a quiet sleep.  But upon attempting to awaken him, it was discovered that he had fallen into the sleep of death!  The spirit had departed.  Doct. Maxwell, who visited the remains, informs us that Mr. Walker’s death was occasioned by the rupture of a blood vessel near the heart, and that he died without any consciousness of his situation.

Misc.:  A simple stone with some wear and chipping to the edges, as well as the usual darkening.  Legible text, last lines appear slightly slanted.

Moses B. Tyler was a manufactures of stoneware, primarily the blue-trimmed buff-colored ceramic goods which were used for everything from brandy jugs to inkwell.s  He moved from Massachusetts to Albany in the early 1820s, setting up an establishment on Washington Avenue.  He formed a partnership for some years with a Charles Dillon, who would later partner with Jacob Henry.  Tyler retired from the business around 1840.  Examples of his work can be found in museum collections, including the Albany Institute of History and Art and the Metropolitan Museum of Art.  The Common Council’s inventory for this gravestone mistakenly transcribed the second date as February 9. 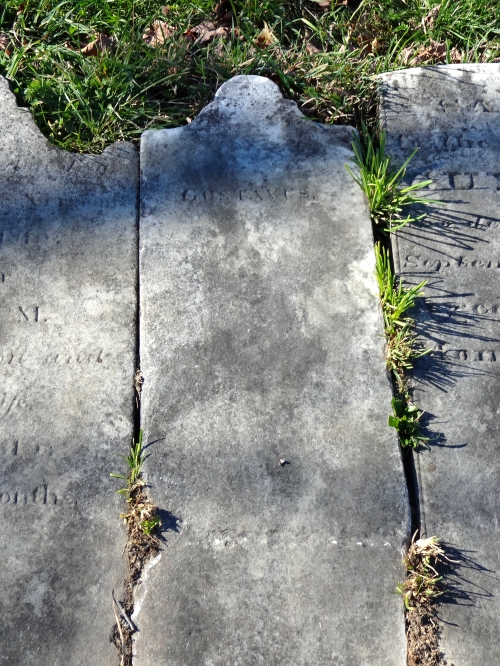 Misc.:  A simple stone with darkening of the marble and wear to the edges, also some chipping along the sides.  Legible.

Apart from the name, this stone bears no other markings.  It appears in the Common Council’s inventory of graves, but there is no other information on the identity of Gustavus, nor whether this is a given name or surname.