Stone has overall darkening, but minimal damage to visible portion.  Lower edge is embedded in the soil.  Inscription is legible except for buried part.  Design includes tassels on the finials and drapery framing a rose.

Inscription:  In memory of Maria Scott Daughter of Uri and Abiah Scott Who departed this life Feb. 2nd, 1827 Aged 25 years 1 month & 10 days.  How peaceful is the closing scene When virtue yields its breath How sweetly beams the smile serene Upon the cheek of death.  The Christian’s hope no fear can blight No pain her peace destroy.  She views beyond the realms of light A pure & boundless joy.

This stone a single rose framed by tassels and  drapery instead of the more common urn or willow.  About two years before Maria’s death, a notice appeared in the Albany Argus offering for sale a farm previously occupied by Uri Scott in Greenbush, Rensselaer County.  Additional information on the family is scarce. 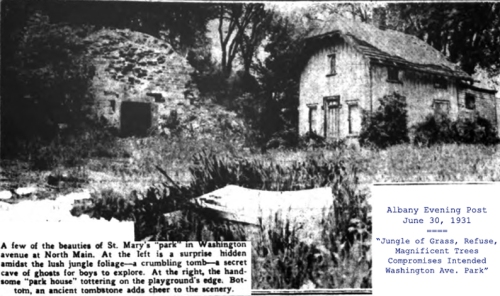 The photo above gives a glimpse of the last traces of old St. Mary’s Cemetery which occupied land just off Washington and North Main Avenues.  Long since replaced first by the park of the same name and, later, by the present Albany High School.  A 1932 article in the Albany Evening Journal profiled Mary Conway, the widow of the cemetery caretaker, who lived in the cottage shown until just before it was demolished.

Inscription:  In Memory of Mrs. Mary Hosford wife of Harley Hosford who departed this life 3rd March 1815 aged 23 years 1 month & 12 days.  Not lost but gone before.

Mary Adams was the wife of Harley Hosford, a maker of musical instruments.  Hosford, a native of Connecticut, died in Havana in 1822 at the age of thirty-one.  The couple had at least one son, Aaron, who was born in Albany in early 1815 and died in 1840.  A clarinet made by him is in the Museum of Fine Arts in Boston and can be viewed on-line.

The History of the American Pianoforte by Daniel Spillane has a brief entry on Hosford:

“Harley Hosford, musical instrument-maker, 97 State Street,” is given in the first Albany directory.  Hosford made made organs and pianofortes in a small way in this year and as early as 1810 was known in relation to pianofortes in that city.  He was moreover a teacher and identified probably to some extent with musical progress in Albany after the beginning of the century Hosford was as far as can be ascertained the first maker of pianos in Albany although his relation to the business was of an insignificant character Nothing can be learned of his subsequent fate