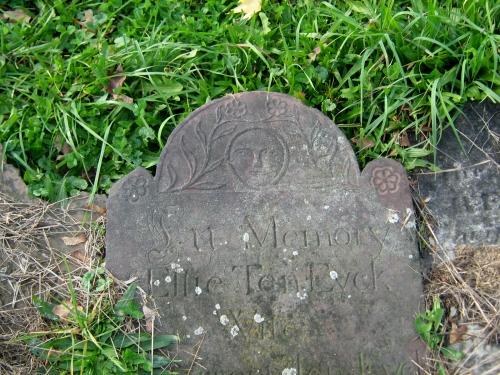 Below are links to posts related to the Church Grounds at my companion to this blog, Albany Rural Cemetery – History In Photos.  While that blog features monuments throughout the entire Cemetery, there are a number of Church Ground posts there.  Some of the Church Ground stones featured there will also be included here at a later date (such as the Garrett Roseboom soul effigy).

Philip Hooker, Architect (one of the Church Grounds’ best-known graves)

Zerubabbel Collins (a soul effigy by a well-known carver)

Violet (believed to have been a slave)

The Western Lodge (which formerly stood adjacent to the Church Grounds) 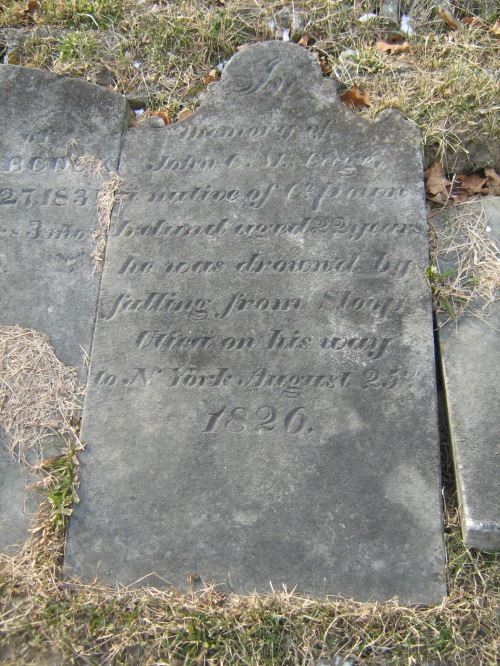 Misc:  Very plain stone with minimal wear except for a broken finial on the left.  Minor weathering to inscription, but legible.

So far, I have found little information on John Cooge beyond the circumstances of his death described on the stone.  A closer look as newspaper from August 1826 may have addition details as to the incident.  The Utica was one of the largest sloops traveling between Albany and Manhattan, a trip which took about four days.   Also, there is no listing for this individual in the Common Council inventory. 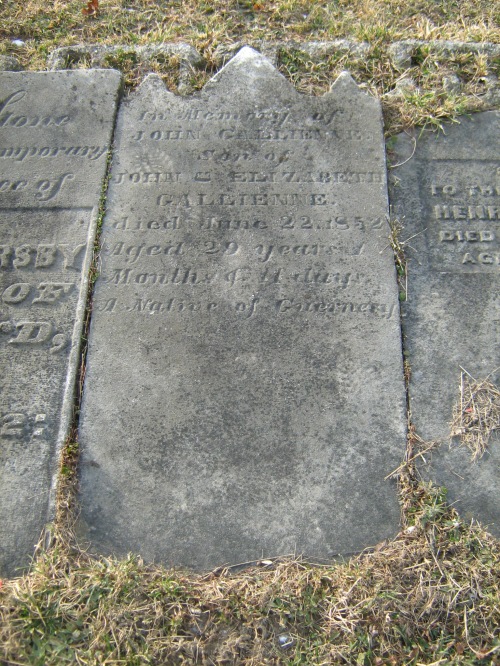 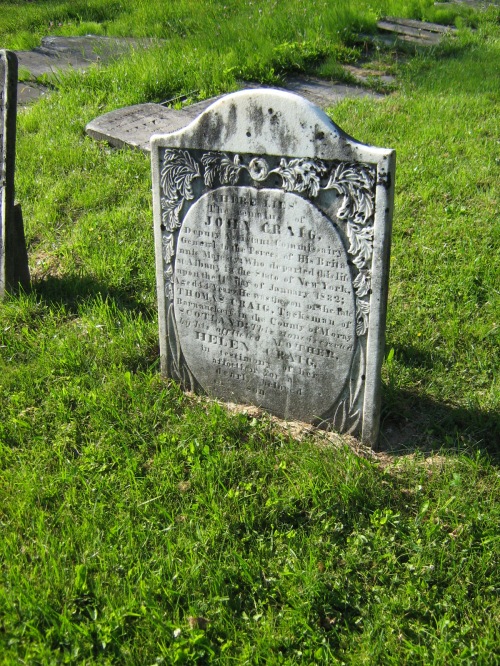 With rare exceptions (such as the Society of Friends lot), almost all gravestones in the Church Grounds were laid flat on the earth in single or double rows grouped by congregation.  Several stones, however, are set upright and are immediately visible when one enters the Church Grounds section from the path which connects the Albany Rural Cemetery with the neighboring Beth Emeth Cemetery (there was once a third entrance to the Rural Cemetery at this spot and the small Western Lodge overlooked the Church Grounds in the late 1800s).

The white marble stone above is among these few upright stones and one of the best preserved markers in this section of the Cemetery.  Though there are some dark stains, the marble is unusually white and may have been cleaned.  The long inscription is legible and the details of the heavily carved foliage are crisp.  The stone does appear to have been truncated; the lower part may have been broken off when it was removed from its original location.   This grave is not found in the Common Council inventory, but it appears in Joel Munsell’s Annals of Albany as part of  a list of inscriptions copied from the Episcopal section of the State Street Burying Grounds and this stone was among those.

Here lies the remains of John Craig, Deputy Assistant General Commissary General to the Forces of His Britannic Majesty; Who departed this life at Albany in the State of New York upon the 11th day of January 1832; Aged 44 years.  He was the son of the late Thomas Craig, Tacksman of Barnauckety in the County of Moray Scotland.  This stone is erected by his afflicted Mother, Helen Craig, in testimony of her affection for her dearly beloved son.

Apart from the information on his gravestone, I have found little background on John Craig and have not yet found any information on why he was in Albany at the time of his death, though he may have been en route to Canada at the time. His name does appear in an 1822 edition of The African Court Calendar and Directory where he is listed in Cape Town as one of six Deputy Assistant General Commissary Generals under His Excellency, the Right Honorable General Lord Charles Henry Somerset who served as Governor of the South African Cape Colony from 1814 to 1826.

Edited to add:  The following account of his death appeared in the Albany Argus on the day after his death:

Yesterday morning, after a short illness, John Craig, Esq. a native of Scotland, and an officer in the Commissariat Department of the British Army.

The members of the St. Andrews society, and the citizens of Albany generally, are respecfully invited to attend his funeral this afternoon, at 3 o’clock, from Bradstreet’s Mansion House.

Mr. Craig was taken ill at Hudson, where he was confined for some days. He arrived in this city on Monday, in a state of extreme debility, and with symptons of a very alarming character.– These continued, notwithstanding the utmost efforts to remove them, until he expired. Although he had the misfortune to close his eyes among strangers, yet he had the consolation to feel assured that he was not without friends, or that sympathy with softens even the pangs of death.

See other upright stones in the Church Grounds. 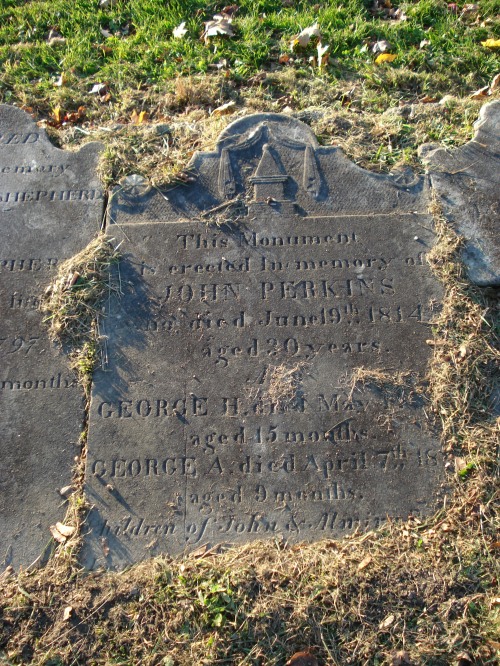 Misc.:  Marble has darkened almost uniformly to gray.  Very little chipping on visible portions.  Lower part of text covered by earth as the stone’s edges are partially embedded in the ground, but can be completed from the listing on the Common Council report.  Design features stylized floral finials, draped cloth, and a carved monument.  Examples of actual monuments like the one depicted can be found in the various sections of the Rural Cemetery and include the monuments of Revolutionary War hero General Gansevoort on the Middle Ridge and bell-maker Benjamin Hanks on the North Ridge.

I have not found a monument for Almira Perkins; she may have remarried.  A very cursory scan of genealogical resources indicates her maiden name may have been Phelps.  I have not yet found any biographical information on John Perkins. 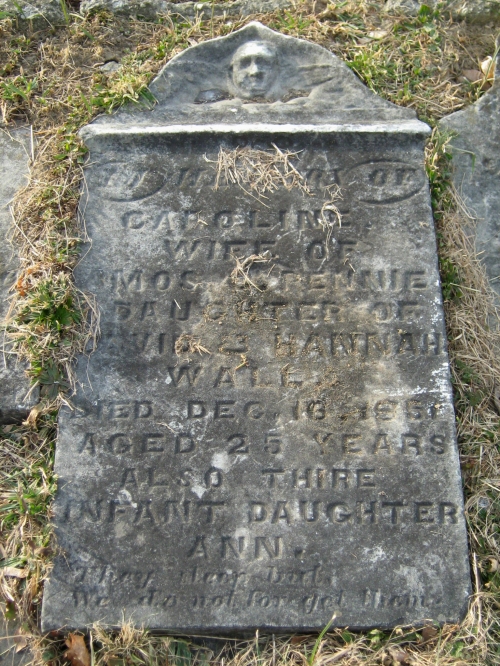 Misc.:  This stone features a very distinctive example of a late soul effigy.  These winged skull or cherub heads had generally gone out of style by the early 1800s.  This is the latest one found here so far.  The face is somewhat weathered, but very expressive.  Marble has darkened, but is in relatively good condition.  Lower part of the stone was probably cut away when it was removed from the State Street Burying Grounds, but the inscription is complete.

Inscription:  In memory of Caroline, wife of Amos C. Pennie, daughter of Daniel & Hannah Wall, died December 15, 16, 1851, aged 25 years.  Also thire infant daughter Ann.  They sleep but we do not forget them.

Note that the carver misspelled the word their as thire.  I have found little information on Caroline, only that her death was briefly noted in Joel Munsell’s Annals of Albany which often drew on newspapers (including death notices) for information.  Amos Pennie served in the Civil War as records show that, at thirty-five, he enlisted on April 20, 1861 and served until May 21, 1863. 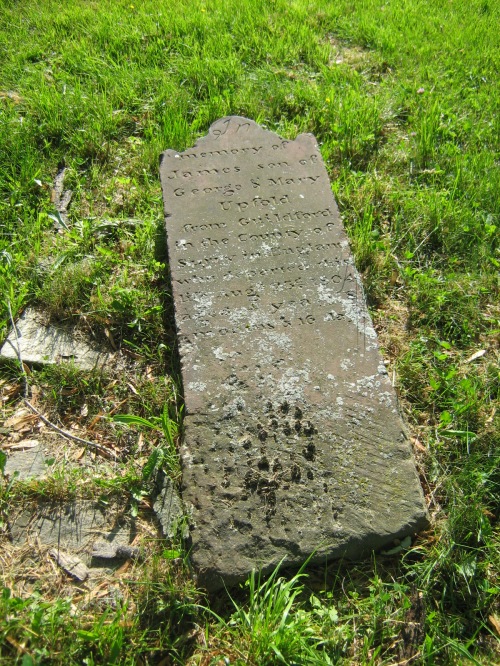 Misc.:  Thick, narrow stone with minor chipping around edges.  Bottom has pockmark-like pattern on the left and a pattern of diagonal lines on the right, possibly marks made when the stone was first cut or during its removal from the State Street Burying Grounds.  Lettering is readable, some obscuring by lichens in a few places.

Inscription:  In memory of James son of George and Mary Upfold from Guildford in the County of Surry in England who departed this life Aug. 23rd 1804 aged 4 year & 8 months & 16 days.

It’s interesting to note that “Surrey” is spelled without an “e” on this stone.  There is no James or Mary Upfold listed in the Common Council inventory, but there is a listing for a George Upfold with no dates and only the notation “Stone sunk.”  It may very well be that the listing refers to this stone and that, at the time, only that part of the inscription was visible.

albanychurchgrounds
Create a free website or blog at WordPress.com.