Markers of Famed Albanians ‘Rescued’ in 1945 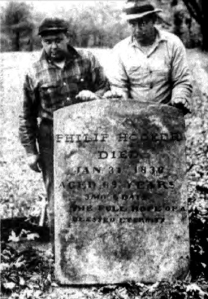 Above:  George E. Weisenforth, at left, and Harold W. Littlejohn, employees of Stephen A. Scullen, Loudonville contractor, raise the headstone of Philip Hooker, famed Albany architect, in long neglected section of Albany Rural Cemetery, now being improved. Headstones will be cleaned and replaced in a two-acres area of the cemetery.

Seventy-five years after thousands of graves were relocated from the State Street Burying Grounds to the Church Grounds lot at the Rural Cemetery, the condition of this final resting place had deteriorated to the point that a contractor was assigned the task of clearing the badly overgrown field, locating hundreds of historic headstones to be cleaned, identified, and set in rows.   An article in the October 29, 1945 edition of The Knickerbocker News gave some details of the project. Markers of Famed Albanians ‘Rescued’ By Francis P. Kimball Burial places of Philip Hooker, noted architect, Gen. Peter Gansevoort, Revolutionary hero, and other famed Albanians, neglected and virtually lost for more than half a century, are being “rescued” and identified as a result of a reconstruction project covering two acres in Albany Rural Cemetery. Work on the project has just been started under a contract awarded to Stephen A. Scullen, Loudonville, on recommendations of Charles B. Heisler, cemetery superintendent. In a special report to the cemetery association, Mr. Heisler asserted the area had fallen into such neglect as to become a “wilderness.” (bold)The Hooker headstone, which with hundred of others in the section had been laid flat on the ground and partly overgrown with grass, was one of the first raised by workmen. Hooker built the old Albany Academy, the original State Bank building and may other noted structures. He died in 1836. General Gansevoort’s headstone was found soon afterward, unprotected and almost illegible. His historical fame arose from his defense of Fort Stanwix, where the Stars and Stripes were first flown against an enemy.(bold) Mr. Heisler said the area under reconstruction is the so-called “church lots” which contain burial places of more than 3,000 bodies removed 75 years ago from the State Street Burying Ground, now the site of Washington Park. The transfer to the Rural Cemetery, largest of its kind in the city’s history, was made at a cost to the city of nearly $50,000. Owing to the manner in which the removals were made, Mr. Heisler said burial records of approximately 1,500 persons were lost. He believes most of these will now be located and identified through recovery of the headstones, many of which were placed in the ground in tiers, one on top of the other. Under the contract let to Mr. Scullen, the entire two-acre area will be searched for headstones. These will be raised, cleaned and reset in rows, partly elevated from the ground to prevent further disintegration. The project was approved by the cemetery association, headed by Robert Olcott, after Mr. Heisler presented a special report. (bold)In the first few days since the project began, more than 200 headstones have been found. Many date back to the early 18th century, and one to 1690. Among them, almost covered from sight by overgrown grass, was the headstone of the Rev. Thomas Ellison, graduate of Queens College, Oxford, who was rector of St. Peter’s Church for 15 years, a State Regent, and tutor to James Fenimore Cooper, the novelist.(bold) Also brought to view was the tablet of Cornelia Tappan Clinton Genet, wife of Charles Genet, former minister to the United States from the French Republic and daughter of Gen. George Clinton, vicepresident of the United States. She died June 29, 1774 at Prospect Hill, Town of Greenbush. The stone which marks General Gansevoort’s burial place reads: “To the memory of Peter Gansevoort Junr., a brigadier general in the Army of the United States who died on the 2nd day of July, 1812, aged 62 years, 11 months and 16 days. He served under Montgomery in Canada in 1775, in 1777 defended Fort Stanwix against St. Leger thereby preventing his junction with Burgoyne and died in active command at the beginning of the War of 1812. Here Stanwix’s chief and brave defender sleeps.” Many other noted figures of their time are believed to be buried in the area. Mr. Heisler said the list turned over by the city contracots in 1868 had 3,125 names, but the cemetery check-up made 25 years later, showed only 1,574 names. This was probably due to the fact that many of the headstones were buried in tiers in the ground. Mr. Heisler said it was difficult to determine how the area fell into such decay, but it was apparently due to lack of provision for care of the graves after the removal. Authorization for the removal was contained in a Common Council resolution Oct. 12, 1866, proposed by Alderman Peter Carmichael. Consent of all churches in the city was obtained for the removal of the bodies. Completion of the projects will require several weeks. Officers of the association include vice-president, W.L.L. Peltz; treasurer Douglas W. Olcott; secretary, Mr. Heisler, and chairman, executive, G. William McEwan. — While the project was clearly an improvement over the abandoned and overgrown condition of the Church Grounds, the stones were not placed upright.  Laying the stones almost flat with the upper edges supported cinder blocks has exposed them to serious breakage and erosion.  Had the stones been set upright (like these in Vale Cemetery), they would likely have fared better. The Hooker headstone is one of few that is currently set upright.  At some point after the 1945 project, this headstone broke into several pieces.  It has since been patched together and set in a vertical position. The Ellison stone is located near the Hooker marker.  It is a large marble slab and may have originally topped a table or box style monument.  General Gansevoort’s stone was moved to a large family plot on the Middle Ridge.  A 2014 photo can be seen here. The headstone of Cornelia Genet was moved to the East Greenbush Cemetery where husband, Citizen Genet, is also buried. One of the most interesting details in the 1945 article is the reference to a stone dated 1690.  The present location of this stone is not known;  it may have been removed to another section within the Cemetery, moved to another cemetery, or it may remain in the Church Grounds in a condition which makes it difficult to identify (see also:  The Oldest Stones).