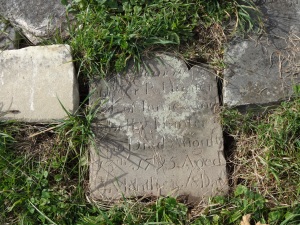 A small stone with some chipping and other wear to edges.  Inscription is legible with some lichen patches and discoloration.

While this stone doesn’t appear in the Common Council’s inventory, the list of burials removed from the section of the State Street Burying Grounds belonging to St. Peter’s Episcopal Church includes both of Peter’s parents – James Hunter (died on January 11, 1805 at the age of forty-three) and Isabella Hunter (died on December 25, 1839 at the age of eighty).