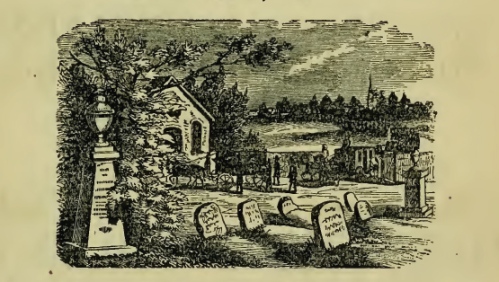 The July 19, 1859 edition of The Albany Evening Journal carried the following column by editor Thurlow Weed.  Weed advocated the closure of the State Street Burying Grounds to make way for the establishment of a new Park.

Washington Park – Many of our leading citizens are considering the expediency of procuring the two blocks between State and Lydius Streets immediately west of and adjoining the Washington Parade Ground, embracing the old burial ground of the several churches, and establishing a Park of fifty acres, under the name of the Washington Park.

The proposed Washington Park and Washington Parade Ground would then contain about sixty acres. About two-thirds of the ground proposed to be taken for the new Park is now occupied by the State Street vaults and burial grounds, and is already thickly studded with beautiful, and flourishing shade trees, and a few walks and drives would soon transform this portion into an old and magnificent Park. The other third of the Washington Parade Ground is diversified in surface, but not objectionable on this account, and could now be purchased at a low rate per acre. A substantial fence, with a few trees set out, and walks and drives constructed, would be sufficient work for a few years. The old vaults and burial grounds must soon be discontinued or removed, and are, even now, partially dilapidated, and are subject to removal on account of malaria and their deleterious influence on the public health. No more burials should be permitted in these grounds, as this section of the city is becoming thickly settled, and a burying ground in constant use, situated in the midst of a large city, will not be long suffered in this age of the world, and with medical science in its present state of progress and enlightenment.

What, then, should be done with these grounds? It is understood that as soon as they cease to be used as burying grounds, the fee simple reverts to the city, the churches possessing only a nonfructuary title for the purpose of burying the dead.

The census demonstrates that Albany is destined soon to become a large and important city, which, from its central position and great wealth and industry, will always wield a powerful influence on the State and the whole country. In addition, she is the Capital of the Empire State, the real key-stone of the whole Union. Such a city should have suitable public Park in a central location. The opportunity now presents itself for the City to acquire such a Park in a cheap and economical manner.

The Washington Park would be nearly fifteen hundred feet square, including streets, bounded on the north by State street, on the south by Lydius street, on the east by the Washington Parade Ground, on the west by Robin street. A single glance at the city map will show its central and commanding position. The greater part of the residences in Albany will soon be situated west of Eagle street; the future rapid progress of the city westward (a singular fact in the history of many cities) is now a well settled opinion in the minds of all observant and shrewd Albanians. Shall we make Albany worthy of its past and future history, by seizing the present opportune moment for procuring a great central Park, which will elevate the morale of the whole city, improve our character and reputation abroad, and provide in a suitable manner for the hundred thousand of human beings destined soon to be embraced in our municipality? If the opportunity is suffered to pass, Albany will assuredly live to regret it, and the future will not present it again.

It is not essential to the success of the proposed Washington Park that the bodies should be immediately removed from the old burying grounds, if future burials therein should be prohibited.

Monuments to the honored and distinguished dead are not in themselves inappropriate ornaments or mementos in public Parks and pleasure grounds; on the contrary, if the bones of our great men reposed therein, with suitable monuments and protection, the equestrian and other statues of our heroes would be honored with additional sanctity and power for the education and improvement of the people.

When statues or monuments shall be erected in the ancient Capital of New York to her Schuylers, Gansevoorts, Van Vechtens, Spencers, Kents, Van Rensselaers, Buells and Hills, they should be placeed in the public Parks and pleasure grounds, so that the beauties of Nature and the virtues of the dead might vie with each other in the work of instructing and elevation all classes of our citizens.

European cities are being desolated with the battle of contending armies, and impoverished by forced contributions and voluntary payments of large sums of money to support hundreds of thousands of soldiers; we are enjoying peace and plenty; let us now, in this appropriate season, dedicate to the public a suitable and noble Park which will be the pride and ornament of the Capital of the Excelsior State.

We bespeak for the Washington Park that calm, wise, and considerate situation which the importance of the subject to the best interests of the city demands.  W.

One response to “Thurlow Weed’s Editorial”