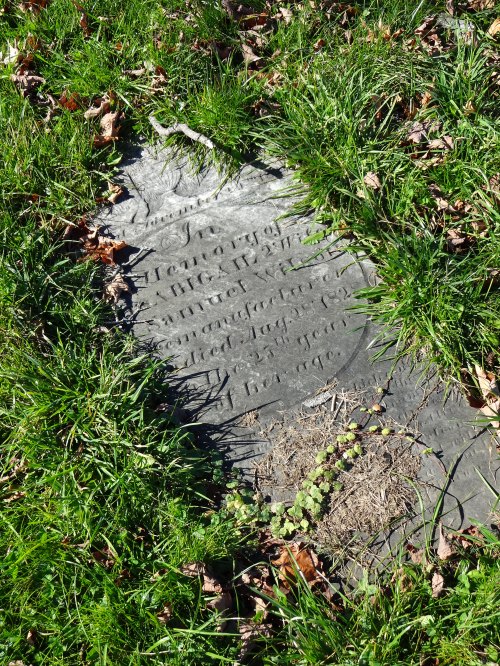 Misc.:  Edges of the stone are deep in the grass, lower edge appears to be partially embedded in the earth.  Stone features a willow tree which frames an urn with a flame.

Inscription:  Erected November 29, 1828, in memory of Mrs. Abigail Wilson, second wife of Samuel Wilson, globe manufacturer; who died August 28, 1828, in the 25th year of her age.  The many exalted virtues which conspicuously adorned the character of this amiable woman, will render her long remembered and lamented by a numerous circle to whom she was allied by the tenderest of ties of consanguinity, friendship, and affection; by whom her society was ever hailed with delight, and joy, and esteem, as a balm to sooth their sorrows and afflictions.

With its classic design and glowing epitaph, this is an exceptional gravestone which was one of a pair erected by Samuel Wilson.  Records, including Joel Munsell’s Annals of Albany, indicate another stone was erected on the same date for Wilson’s first wife, Jane, who died the preceding year at the age of twenty-eight.  Jane’s stone, which has not yet been located and photographed, also features a long, loving epitaph and also memorializes an infant son who died a month before Jane.  This Samuel Wilson was the son of noted globe manufacturer James Wilson.  The elder Wilson is also buried in the Albany Rural Cemetery with an elaborate monument by Robert Launitz.